Released on July 7th 1960 starring Peter Cushing as Doctor Van Helsing and Yvonne Monlaur as French school teacher Marianne Danielle. After French school teacher Marianne, takes refuge in Baroness Meinster’s castle and free’s her son from his castle confinement which leads Baroness, in anger, to find Marianne for what she did. Baroness is a vampire and takes village girls as victims hoping one of them will be Marianne. The multiple incidents leads Doctor Van Helsing to step in and take action to protect Marianne and the village from the evil of the vampires. Hammer Film Productions is a British film production company founded in 1934, it is best known for a series of gothic horror films made from the mid-1950s until the 1970s which include Dracula, The Vampire Lovers, The Mummy and many more! Show your love for the classic genre with our Officially Licensed merchandise collection. Printed on 300 gsm premium soft cotton paper, our giclee prints are of the highest quality. Our prints come hand rolled to ensure quality is maintained in the finished product. Frame not included.https://www.awin1.com/pclick.php?p=25123032455&a=234835&m=7335 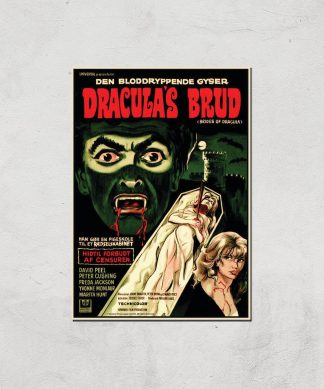