Released on October 4th 1970, starring Ingrid Pitt as Marcilla Karnstein and Peter Cushing as General Spielsdorf. Carmilla is put into the care of General Spielsdorf and his family. She befriends the General’s niece who suffers nightmares and fears of attacks from Vampires and later dies of an illness, leading to Carmilla becoming the suspect after a quick departure after the death. Carmilla takes residence at Mr. Morton’s house, and forms a strong bond with his daughter Emma, which leads to multiple deaths and blood-suckings. Hammer Film Productions is a British film production company founded in 1934, it is best known for a series of gothic horror films made from the mid-1950s until the 1970s which include Dracula, The Vampire Lovers, The Mummy and many more! Show your love for the classic genre with our Officially Licensed merchandise collection. Printed on 300 gsm premium soft cotton paper, our giclee prints are of the highest quality. Our prints come hand rolled to ensure quality is maintained in the finished product. Frame not included.https://www.awin1.com/pclick.php?p=25123032467&a=234835&m=7335 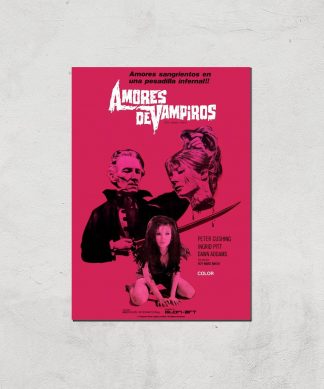